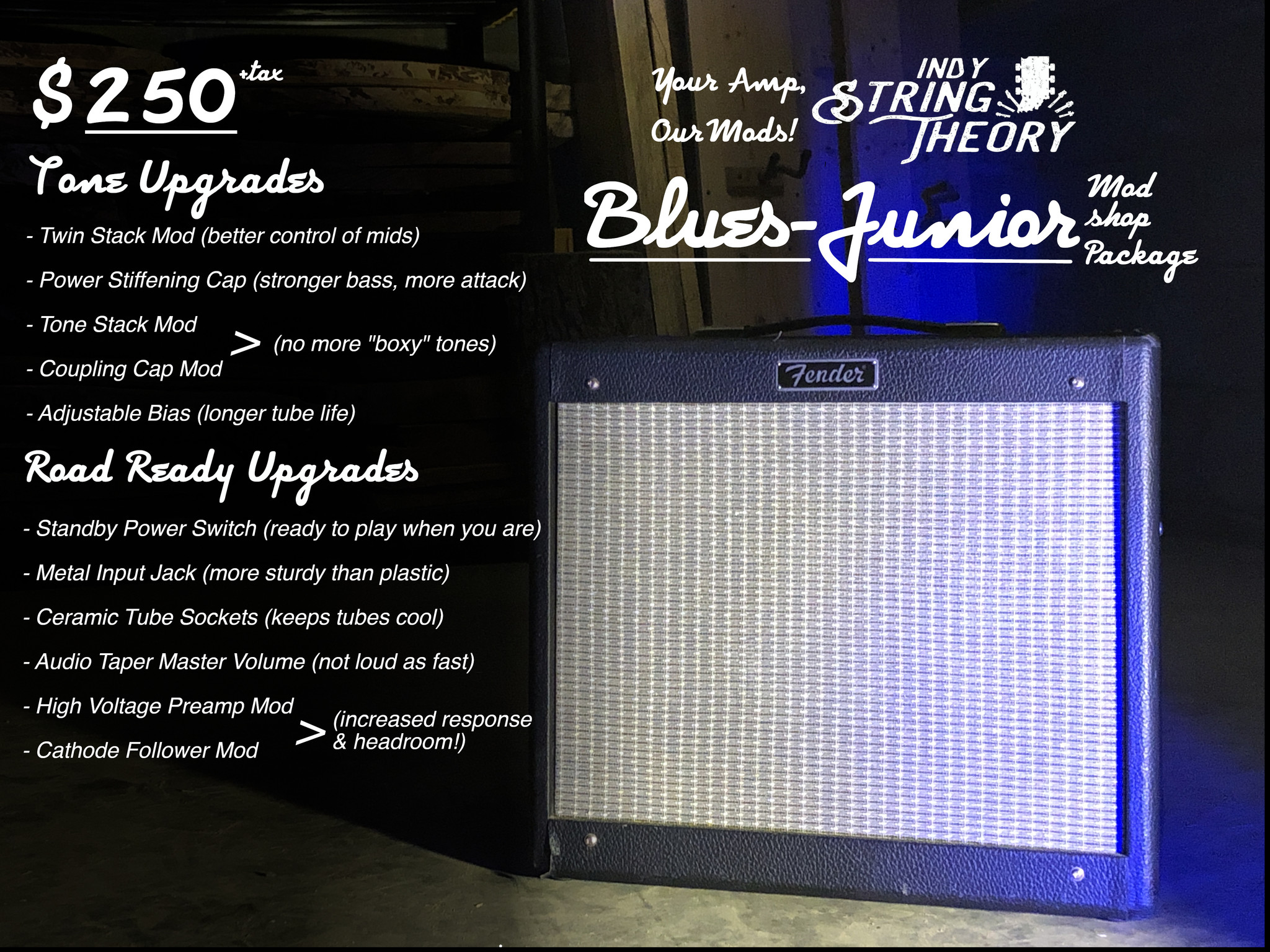 Yes, we will mod your Blues Junior.

We can install all (or combination thereof) of the modifications below.

These are great, time-proven mods.

We have all the kits you need for a great-sounding Blues Junior, with parts selected for quality and performance.

These modifications were created and developed by the late Bill Machrone (billm to those who knew of him on the forums), the former Editor-in-Chief of PCMagazine and perpetual tinkerer. His modifications have been sold and installed through his small shop for a number of years. After his unfortunate passing in late 2016, his family carried on his work modding Blues Juniors up until around 2020, when his website went offline. By all estimations, Bill’s modifications have been installed in hundreds, if not thousands, of amplifiers. Even Fender decided to implement a few of Bill’s tweaks in later revisions of the Blues Junior (although not enough of them, if you ask us!).

We here at IST are humongous fans of Bill’s work, and after being asked to perform a number of his mods to our customer’s amps, have decided to offer the installation of those modifications as a service in our Custom Shop.

Everything you need to eliminate that boxy sound, take the harsh edge off the distortion tones, add back the “missing” lowest octave of bass and sweeten the clean tones: Orange drop tone stack and coupling capacitors, adjustable bias trimpot, power supply stiffening capacitor, The adjustable bias is a precision, sealed, 25-turn trimpot for setting your bias accurately. The power supply stiffening capacitor doubles the size of the main filter stage, halves the ripple going to the output tubes, and provides solid bass tones that you’ll notice right away. Kit includes the Twin Stack Mod, which changes the operation of the tone circuit to operate more like a Twin, allowing you to better dial in mids or essentially scoop them.
The cream board has been produced from 2001 to the current Blues Junior III. If you’re not sure, remove the back and look.

Everything you need to eliminate that boxy sound, add back the “missing” lower octave of bass, take the harsh edge off the distortion tones, and sweeten the clean tones: Orange drop tone stack and coupling capacitors, adjustable bias trimpot, a power supply stiffening capacitor. The adjustable bias is a precision, sealed, 25-turn trimpot for setting your bias accurately. The power supply stiffening capacitor doubles the size of the main filter stage, halves the ripple going to the output tubes, and provide solid bass tones that you’ll notice right away. The green board kit also includes a new reverb coupling capacitor and resistor to overcome the hum- and noise-prone reverb circuit on the green board. The mod updates the reverb so it performs identically to the current cream board. Kit includes the Twin Stack Mod, which changes the operation of the tone circuit to operate more like a Twin, allowing you to better dial in mids or essentially scoop them
The green board only refers to amplifiers produced from 1995 to part of 2001. Remove the back to be sure.

Presence control: $15 – possibly not compatible with the IV (haven’t tried this on a IV yet)

The presence control affects mid-high frequencies and gives the amp more (or less) bite. It controls the amount of negative feedback in the output stage. Negative feedback controls the accuracy of the output stage’s reaction to the signal sent to it by the prior stages in the amplifier. With no negative feedback, the output stage tends to overshoot and exaggerate the high midrange and sharp, percussive sounds. With too much negative feedback, the amp sounds slow and mellow; pick attack is muted. The Billm presence control lets you adjust presence from a brighter, louder tone that puts an aggressive edge on your pick attack to a more laid-back sound that’s ideal for jazz or a warm, mellow tone that swallows pick attack and lets the note bloom out. The stock value for presence is at about the 1 o’clock position on the control; you can cut or boost from there.

It uses Mogami low-noise coaxial cable to connect to the circuit board and requires that you drill a 9/32” (7mm) hole in the face panel below the Fat switch. Despite the drilling, I highly recommend this mod—it will give you outstanding control over the amp’s aggressiveness, going from hard-edged to mellow. The control has a built-in pull-up switch for the optional Clean Boost.

Sparkle Control: $15 – possibly not compatible with the IV (haven’t tried this on a IV yet)

The Sparkle Control makes the amount of sparkle reduction adjustable from zero (stock Series III) to the same as the series II, to even darker, like the old green board (1995-2000) Blues Juniors. When you pull up on the knob, it defeats the control and gives you the stock BJr III amount of sparkle. You can make a Series III sound like a series II, a Series II (2001-2010 cream board) sound like a Series III, and either of them sound more like the old 1995-2000 green board. It will also brighten the green board, giving it a high-end sheen that you didn’t know was there. Requires drilling, mounting on the faceplate, like the presence control.

Brighter, crisper tone, better headroom for only $5. This mod replaces four resistors in the power supply and preamp and brings the voltages up to a more typical Fender Blackface level. Highly recommended for green board amps. It works for cream boards too, especially if you’re looking for a brighter tone with more clean headroom.

You can replace the plastic input jack with an all-metal Switchcraft jack (the industry standard). It comes prewired with Mogami low-noise coaxial cable and includes two Switchcraft isolation washers (one flat, one shoulder washer) to eliminate the possibility of ground loop hum. When performed on the green board version, it bypasses a noise-prone portion of the circuit board.

Hate the way the master volume gets too loud too fast? An audio-taper control solves the problem, and makes the loudness smooth and progressive. It’s especially good when you’re trying to play quietly at home. The same audio-taper control also works well for the reverb. It extends the range in the same way, making it smoothly progressive at the low end, so if you’re always stuck between too little and too much reverb, it’s an easy fix. This pot does not replace the volume control, only the master volume or reverb.

This is a one-inch square board that connects to your circuit board (held by one of the mounting screws) and connects to the circuit board in three places It gives approximately the same increase in volume as the Fat switch, but without the increase in bass. It makes clean or distorted tones louder, and when used in conjunction with the Fat switch is about twice as loud. It does not increase distortion unless you’re really playing loud. It is usually controlled from the pull-up switch built into the presence control, or, if you wish, on its own footswitch.

By popular demand! This kit replaces your power switch with a heavy-duty Carling progressive switch. It has three positions: off, standby, on. The kit is plug-and-play; no soldering or cutting of wires.

High-quality, all metal Switchcraft jack, pre-soldered leads, lock washer, and nut. Requires drilling a 3/8 inch hole adjacent to the existing jacks. The aux jack is in parallel with the main speaker jack and is intended for use with a second 8 ohm speaker or cabinet. It does not cut off the internal speaker.

Electrolytic caps don’t last forever. They may leak, or the internal resistance (ESR) goes up over time. The result is mushy tone, oscillation, “tails” on notes and general lack of punch.

The cathode follower creates non-gain, impedance-matched power to the tone stack from the preamp. Enjoy increased response, clarity and headroom by reducing the load on the preamp! Since one half of the work is performed on the tube board, we will replace the cheap plastic tube sockets with higher quality ceramic tube sockets.

One of the biggest problems Stock Blues Juniors face is overheating on the Tube Circuit Board, especially around the el84 power tube sockets. Cracked solder joints, lifted/burned traces, short circuits are very common because of the continual heating and cooling/expansion and contraction of the tube sockets. Add in the cost-cutting measures Fender used in the production of the circuit boards, and, well… you can see where we’re going with this.

On tube circuit boards deemed “Too far gone” we have installed High Quality replacement boards made by Borish Electronics out of Chicago, IL.

This board has high quality, ceramic tube sockets installed, as well as plated through holes which provide double the tube socket holding strength of the originals and double-sided routing to eliminate cross talk as well as noise.  They are also made out of a thicker, sturdier, material that holds up much better over time, especially when combined with the adjustable bias we install as part of our “Basic Mods Kit”

By using our website, you agree to the use of cookies. These cookies help us understand how customers arrive at and use our site and help us make improvements. Hide this message More on cookies »